Jaqueline Tyrwhitt (1905-1983) was one of the organizers of CIAM 6. Tyrwhitt was then at a pivotal point in her multifacted career as a town planner, educator and editor. CIAM 6 marked the beginning of her entrée to the CIAM inner circle, where she played a key role in shaping the postwar modern movement. Her contribution, especially to the planning arm of modernism, is insufficiently appreciated because she willing worked as the “the woman behind the man” —notably as a disciple of Patrick Geddes, translator and editor of Sigfried Giedion, key ally of Jose Luis Sert in establishing urban design as an academic discipline at Harvard University, and collaborator with Constantinos Doxiadis as editor of the journal Ekistics (Doxiadis’ name for an interdisicplinary science of human settlements). 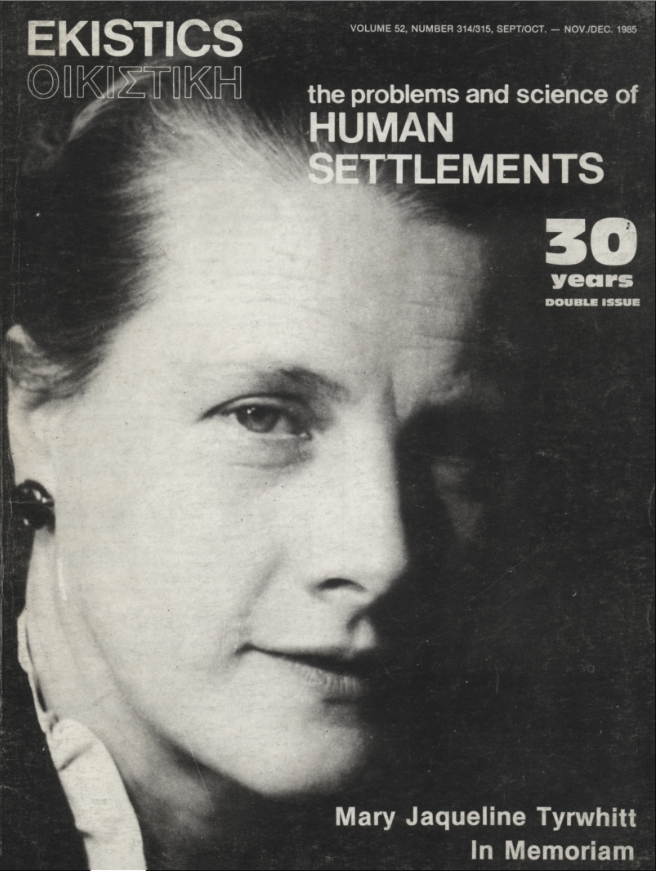 Born in South Africa and raised in London, Tyrwhitt was trained at St. Paul’s Girls’ School, the Royal Horticultural Society, and AA to become a garden designer. In 1936, while working at Dartington Hall, the experimental estate integrating agriculture and industry established by Leonard and Dorothy Elmhirst, Tyrwhitt encountered Geddes’ Cities in Evolution (1915), which inspired her to study town planning. In 1937, she enrolled in the new School of Planning and Research for National Development (SPRND), recently founded at AA by E.A.A. Rowse and other followers of Geddes.

Tyrwhitt was among the few graduates of SPRND, which closed in 1939. By then “an ardent disciple” of Geddes, during World War Two Tyrwhitt served as director of the Association for Planning and Regional Research (APRR), a new organizataion formed to carry on SPRND’s work, and develop practical applications for Geddes’ principles for application in Britain’s postwar reconstruction. Tyrwhitt codified those methods in a correspondence course in town planning for those serving in the armed forces. At this time she also joined the MARS group. By 1945 Tyrwhitt had forged a highly influential synthesis of Geddes’ bioregionalism amd the utopian ideals of CIAM modernism as adapted by the MARS group.

Tyrwhitt’s ideas evolved after she she made an official tour of North America in spring 1945 to lecture on British post-war planning. She was warmly welcomed there by CIAM members, notably Moholy-Nagy and Sigfried Giedion, who inspired in her a deeper appreciation of the need for planning to be creative and incorporate aesthetics.

Her new perspective and her transnationalism were evident in the choices she made in her edited collection, Patrick Geddes in India (1947). Her aim was to demonstrate the relevance of Geddes’s principles for urban reconstruction worldwide. She also took full advantage of opportunities to participate in transnational discourse as progressive reformers renewed their international ties in the context of the United Nations organizations.

In September 1946 Tyrwhitt participated in a MARS group meeting with then-CIAM president Cornelus van Eesteren and general secretary Giedion to discuss potential themes for the first post-war CIAM congress. Rather than address any particular theme, CIAM 6 was an interim meeting, to plan for the next congress. Members shared a commitment to revitalize CIAM—it had been ten years since the previous congress—but they disagreed over the direction of future work. One group wanted to study town planning issues, building on tenets of the Athens Charter (1933); the other, which included many MARS members, urged new attention to aesthetics.

At CIAM 6 Tyrwhitt served on the committee to prepare a program for CIAM 7, which split into two groups.: Tyrwhitt joined the group focused on Urbanism (planning); and Giedion chaired the group focusing on Architectural Expression (aesthetics). Tyrwhitt’s contribution can be detected in the report of the Urbanism Commission, which argued that advances in physical and social planning since the Athens Charter obligated CIAM to rethink its position “in the whole domain of community planning as related to the economic and physical planning of regions and national areas” (Bridgwater 1951: 22). Tyrwhitt also made an invaluable contribution to Giedion’s A Decade of New Architecture (1951), which included the only published report on CIAM 6.

MARS member Mark Hartland Thomas co-chaired the committee charged with restating CIAM’s aims, which proposed a reformulation that combined both themes: planning and aesthetics. Thomas echoed in his report the holistic view Tyrwhitt had expressed in Geddes in India: “CIAM itself would undertake the task of imagining the new world of man as a whole, and seek to point the way towards a physical environment that would satisfy the material needs of man and give the longed-for stimulation to his spirit” (1951: 10). This wording signaled the growing influence of Tyrwhitt’s synthesis of a Geddessian line of modernist planning thought—as opposed to the more formalist Corbusian line—both within the MARS group and the postwar incarnation of CIAM.

Bridgwater Commission III A. 1951. Urbanism: Preparation for CIAM 7, in A Decade of New Architecture, edited by S. Giedion. Zurich: Girsberger, 22-5.