This photograph from the RIBA Collections shows CIAM 4 delegates visiting the Temple of Poseidon, Cape Sounion during the CIAM 4 Congress in 1933 which famously took place on an ocean liner SS Partis and travelled between Marseilles and Athens. The photograph includes Wells Coates who was one of the first British delegates to CIAM. 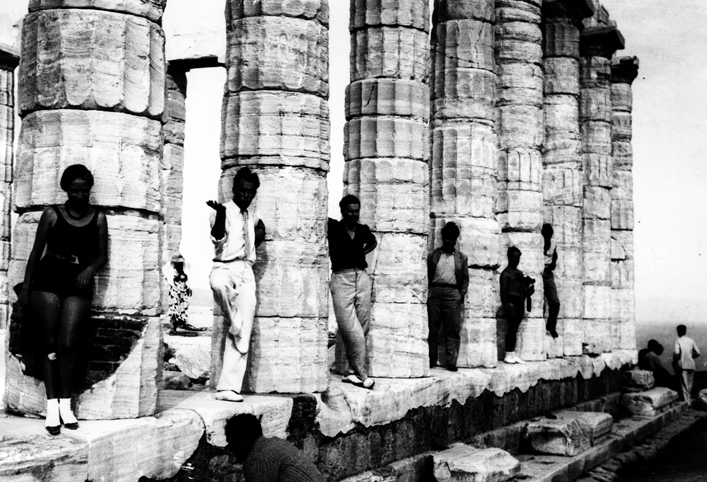 Political upheaval and Russia and then Germany and the rejection of modernist architecture in those countries had begun to unsettle and reorder CIAM’s terrain of activity. Because CIAM 4 couldn’t be held in Moscow as planned the organizers called on friends to find an alternative venue and were offered the use of a cruise ship. CIAM 4 became an almost mythical event, with 100 delegates taking to the sea in high summer to discuss how cities could be designed in the future.

Together they made a collective analysis of thirty-four cities which later led to the Athens Charter; guidelines for planning modern cities. This city vision was so called the functionalist city and divided the city into different functions of living, working, recreation and transport. Their thinking reflected the impact of new mass technologies like the car and changes in society like people’s right to vote and to have paid holiday.

The method of analysing the city was based on guidelines developed by Cornelis van Eesteren for his work for the expansion of Amsterdam. The maps were coded graphically to show the physical, economic and social structures of the cities. They recorded the classes of housing, commercial and civic functions and space for recreation. A separate map recorded traffic movement and connections to the wider region. Le Corbusier and Gropius contributed to how the maps should be coloured to enhance their legibility.

As well as enabling architects and urban designers from different countries to collaborate and share ideas CIAM often invited artists and writers to participate in conversations. The use of symbols and pictograms in the maps drew on Otto Neurath’s work for ISOTYPE. During CIAM 4 a talk was given by the artist Ferdinand Leger who emphasised the role of colour in architecture and the event was recorded on film by the Hungarian Painter and Photographer; László Moholy Nagy.

The Amsterdam map prepared for CIAM 4 is featured in part on this website. In the summer of 2017 the CIAM 6 Cities Revisited project will be travelling around Bridgwater. Based on this hand rendered map from the CIAM archive we will be developing a shared map of the town recording people’s perceptions of creative, learning and leisure spaces in the town and generating new symbols to represent how people like/would like to use public spaces.

Moholy-Nagy was invited to make a film of CIAM 4, at the time he was living in the Netherlands having left Germany and the Bauhaus where he had taught for 10 years. He lived in London in 1935 moving to the USA where he founded the new Bauhaus.