New York, London, Paris , Munich everybody’s talking about….well, Bridgwater it seems. And that was certainly the case on 12th September  1947 when everybody who was anybody in the International world of Architecture came to the Somerset town to plan a high rise future for a post war population…..so how on earth did that happen…..? 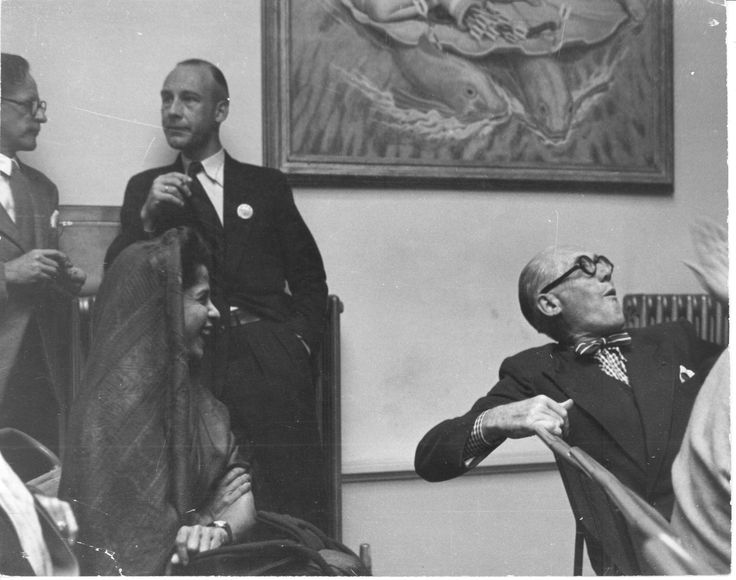 The leading lights of the CIAM (The Congres Internationaux d’Architecture Moderne…and the French usually can be deciphered through anagrams so that’s the International Conference of Modern Architecture) all dropped in on the newly opened Bridgwater Arts Centre for a few days, were home hosted by the people of the town and got down to work at a Conference, which should really have been in New York….but..well, good second choice.

The so called ‘modern’ architecture had its roots in the turn of the century clash of ideologies that would lead to massive social and economic changes in the 20th century along with several catastrophic wars. The early pioneers of  this ‘modern architecture’ dedicated themselves to providing better living conditions for people in the increasingly crowded cities thrown up by 19th century capitalism .

In contrast they promoted  architecture that was functional, and free of decoration or historical associations. This was a blunt rejection of 19th century neo-classicism and instead looked at including new ideas such as cities of skyscrapers surrounded by parkland, or estates of apartment blocks with community facilities . And to achieve this they sought new technologies of construction including the use of  glass, steel, and reinforced concrete’ making what they produced stronger, lighter and taller.

Who was involved?
The big names of the ‘Modern Architecture’ movement were all in Bridgwater in 1947. The Swiss-French Charles Eduard Jeneret-better known as ‘Le Corbusier’ (1887-1965) was the most well-known. Walter Gropius the German founder of the Bauhaus movement which complemented the modernism of Corbusier and advocated standardisation in architecture including the mass construction of apartment blocks for workers. These were the big two , but there were more.

The 1920’s were exciting times for CIAM and the modernist movement. Like people across the world they thought that with the end of the Great War they’d seen the ‘war to end wars’ but instead they found themselves in an ‘inter-war’ period and new dangers were on the rise. In Germany Hitler’s Nazis saw Bauhaus as a training ground for Communists and closed it down. Gropius left for England and then the USA while the Nazis instructed their architects to reflect Nationalism and Fascism. The aim of this was to ‘awe’ the spectators by the hugeness of the scales.

The modernists reacted and many-but not all-fought back. Jose Luis Sert (1902-1983) was the Chairman of CIAM at the Bridgwater Conference. A leading architect of the Revolutionary Spanish Republic in the 1930s which was involved in a Civil War against the Fascists of General Franco. At the 1937 Paris Exposition Sert purposely put the stall of the Spanish Republic next to that of Nazi Germany and simply displayed Picassos painting of the Nazi massacre at Guernica. One German officer allegedly asked , upon seeing the Guernica exhibition “Did you do that?” Picasso responded, “No, you did!”.

Architects from Czechoslovakia were prominent at the Bridgwater Congres, including Jaromir Krejcar (1895-1950) who was married to the Czech resistance fighter Milena Jesenska who was captured and executed by the Nazis at Ravensbruck. It was Krejcar who designed and rebuilt Lidice after the war, scene of an appalling Nazi massacre. Alfred Neuman (1900-1968) who was a senior academic at the Vienna Akademie and later at the Paris Atelier but ended up having to be rescued from the grim Terezin concentration camp. Erno Goldfinger (1902-1987) was a Hungarian Jew who escaped to London during the 1930s and went on to become a massive figure in post war UK design work including bigger and bigger tower blocks.

Goldfinger -as you might have guessed -was the inspiration for Ian Flemings character of the same name and the author was amongst those who described Goldfingers constructions as ‘brutalist’ in design. When he learnt of his name being taken in vain he threatened to sue. Fleming responded by saying he’d actually wanted to call him Goldprick and dared him.

World War Two sets the scene
Some , however, chose to work with their wartime occupiers. Bohuslav Fuchs (1895-1972) worked in Moravia throughout the war, designing the Vila Filip Prasil in Bridgwater’s twin town Uherske Hradiste and went on to work during the Communist years there as Professor of architecture at Brno University.

Cornelis Van Eesteren (1897-1988) was the Chair of CIAM throughout this period and stayed in his native Amsterdam throughout.  Disappointingly, Le Corbusier himself worked in Vichy France throughout the war and even before then had offered his services to Mussolini anyway.

World War 2 set the scene for the Bridgwater Conference. It was to be the first time the Modernists would meet after the global conflagration and the holocaust that changed everyones lives, flattened cities and displaced millions. However, it now gave them the opportunity to operate on a massive scale. 74,000 tonnes of bombs had fallen on Britain. Huge areas had been destroyed and so the state had to act. Central and Local Government were the principal patrons. Austerity was the order of the day and a fundamental functionalism was top of the menu. Schools, hospitals, offices and housing estates sprung up everywhere using whatever materials were available to make them work for the many they were needed for.

1947-a Pivotal Year
1947 was a  pivotal year in many respects. The war had ended but the Cold war hadn’t yet started. Czechoslovak delegates attended the conference, but it was the last one they were allowed to as the Soviet World turned its back on the rest of Europe, yet at the same time anyone familiar with the Eastern Bloc will see today the hi-rise legacy of the ideas of the period.

And why Bridgwater of all places???
So why was Bridgwater chosen?  Well, originally they had planned to hold CIAM 6 -the key first post war congress, in New York – but, for an organisation steeped in austerity, the cost of Transatlantic travel was prohibitive . On top of this the organisers decided  to ‘go into rustication away from the distractions of a great city’. And Somerset had just the destination tucked away in its green, yet slightly bricky , heart . The Bridgwater Arts Centre was one of the first projects of the newly founded Arts Council of Great Britain and at the time it was created, in 1946, it was seen as a place that major touring artists could stop over adding a rural retreat into an otherwise hectic national touring schedule.

On top of this the parliamentary constituency had hit the headlines in the run up to the war as the only town to fight an election on the issue of standing up to the rise of Fascism. MP Vernon Bartlett, a popular journalist and Internationalist had won in 1938 and again in 1945 and was a renowned personality, a progressive independent socialist and had contacts everywhere. Not only this, but the Art Centre itself had already built up a Membership list of local citizens who were keen to home host visiting artists-and it was through this body that the 80 CIAM guests were accommodated.

It may also need to be mentioned that the new model prefabrication factories in nearby Bristol were also an attraction and one day of the event was spent there resulting in the only ensemble photograph of all the delegates. 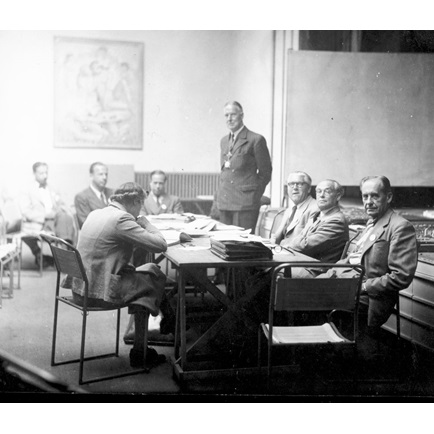 The Conference itself
And so it was to Bridgwater from 7-14th September 1947 that CIAM6 brought 97 leading architects, urban designers and writers from across the Globe to explore how they could “work for the creation of a physical environment that will satisfy man’s emotional and material needs and stimulate his spiritual growth”.

On Thursday 11th September the group went on a visit to Bristol Airplane company’s aluminium temporary housing factory and the focus of the meeting that day was on the future organisation of CIAM.

On Friday 12th September it was the seminal day of the week with a key lecture at the Art Centre by Gropius on Urbanism and by Sert on City Planning followed by a final session featuring everybody on ‘Architectural Expression’. Gropius emphasised that ‘land is not a commodity to be traded in shops over a counter’ but in case he sounded too communist stressed that he “was not in favour of undermining the basic conception of property”. His keynote speech concluded with the advocation of “neighbourhood units built in the country and to repopulate cities with greenery including parks, communal facilities, community centres and schools”.

Such was the excitement generated at the Friday session that 2 additional lectures were added for Saturday 13th September  to investigate the ‘Swedish model’ amidst concerns from British architect  James Richards  (1907-1992) that the new architecture wouldn’t be understood by ‘the man in the street’ and further worries by Czech architect Siegfried Giedion (1888-1968) about ‘kitschness in the face of the need for a new monumentality’. Giedion had been the very first secretary general of CIAM and was clearly aware of the historical precipice that the Bridgwater conference found itself on.

Mayor of Bridgwater Robert Chamberlain opened the Conference and the moment was captured on film. In letters and other notes after the event it was clear that the architects had enjoyed their stay in Bridgwater and had talked to the many local people who either hosted them or who they met in the course of exploring the town.

The Bridgwater Mercury however, ran only a small feature for such a major event and instead chose to concentrate on the ‘exotic dress’ of the delegate from the newly independent India,  Minetta Da Silva (1918-1998).

Thinking Big in Bridgwater
In September 1947 Bridgwater played its part in designing the future and creating new environments for a new world. Where areas had been bombed into rubble, new building projects had an open page to write on. In many areas-including Bridgwater -there were 19th century slums to demolish in the process and homes to rebuild. The closest Bridgwater has to the ideas of the modernists is the mixed hi/lo-rise 1960s community of West street. These designs and developments in themselves were not the final word and more often than not the high ideals of the modernists when put into practice often created the isolated and neglected inner cities of the future with an urban landscape often hostile to social harmony and leading to community breakdown.

However, often it wasn’t the ideas of Modernism that failed but the way they were implemented. Local Authorities on tight budgets cut corners and improvised, future governments seeking to roll back the frontiers of the state underfunded and then neglected the vast council estates and in recent years developers knocked down community facilities only to over populate communities with more and more houses, often of inferior quality and with little or no breathing space.

70 years after the original Bridgwater Conference, the Bridgwater Arts Centre is again deeply engrossed in the subject. Architect Juliet Bidgood has fronted a major project, backed by Bridgwater Town Council amongst others, called ‘Think Big in Bridgwater’ and where schools have taken up the topic to encourage their students to consider if they could play a part in their towns future. On 21st September 2017 they will recreate the Conference with modern architects and open the doors once again to people who want to take a relook at the ideals that the 1947 congress thought were the right ones to shape those subsequent years.